How often does a crisp winter wind make bearable the typically skin-burning Central Florida sun?  Rarely, but this is exactly what inspired me to seek an outdoor adventure.  A spontaneous sunset bike ride with my dog was in the works. At roughly 4 PM, with my large dog and mountain bike wedged in the back of my hatchback, we departed for the Little Big Econ recreation area on the outskirts of Orlando, FL.

When I moved to Orlando, Little Big Econ became my preferred “mountain” biking trail.  It's an immersive experience in untamed wilderness only 30 minutes away from the city. It's where I can disappear, hearing nothing but the heartbeat of nature.  The rugged, uneven terrain is littered with protruding roots and fallen branches.  Put simply; it’s not your grandma's walking trail.  Apparently, those roots and sandy turns are enough to call this mostly flat path a “mountain biking” trail. My Appalachian Mountains-native heart is insulted, but I enjoy biking the trail, so I have made my peace.

Around 4:30, I parked the car and Walt, my bear-like Chesapeake Bay Retriever, exploded through the door and disappeared down one of the Snake Trails.  I quickly grabbed my bike and launched into the trees to find him excitedly waiting at the first corner.  After riding a few miles, we approached a wooden bridge that traversed a  stinking creek of muddy brown water.  I crossed the bridge easily but, Walt, of course, ran right through the mud.  He even stopped to waller a while! 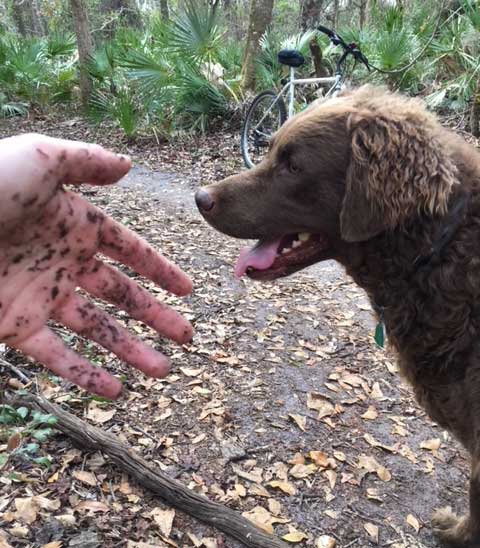 As we approached an area known as the Ditch of Doom,  I needed to make a decision. There are two trails here, one I had ridden before and the other unknown. We headed down the unfamiliar one for a bit of added adventure.  My choice hugged the steep banks of the Econlockhatche River where one mistake on the sandy roots would have sent my bike and me into the river.  I was intently focused on staying on the path when, suddenly, an armadillo pops out of the brush!  Excited by my first armadillo, I slammed on my brakes to have a closer look.  Walt, however, felt the best thing to do in this situation would be to attack.  His bear-like body came sprinting by, knocking me over and I almost took a dive into the river.  Somehow, the Armadillo escaped, and Walt came lumbering back to check on me.

Eventually, the trail led us down to the river's edge.  Walt had obviously gotten thirsty by this point, but I didn’t want him near the water for fear of Alligators.  I had a water bottle that I am always willing to share with him, but he is too spoiled for that.  I only carry a fanny pack when I bike, but it’s just for a phone for emergencies and treats to bribe the stubborn dog into obedience.  Without a bowl or way for him to drink, I was reliant on the only thing available: my hand. After a quick wipe onto my shirt and a mental note to sanitize that hand later, we were off again.  Our route had us winding around the river along a narrow, slightly hilly path surrounded by palms and oaks. There was not a human in sight as my bike glided over protruding roots and around sandy bends.

It was about this time that Walt began to act like a tired toddler. The sun was fading fast, so we started back.  Somehow we missed a turn and found ourselves on the wrong route.  I knew the car was to the west, so we followed the setting sun.  Unfortunately, “heading west” was never so complicated.  Each time I turned on a path headed west, it winded around so that Walt and I were going east, then north, then east again.  Soon we were lost, very lost.  Luckily, we rounded a corner and came upon a massive wooden post with a map attached. 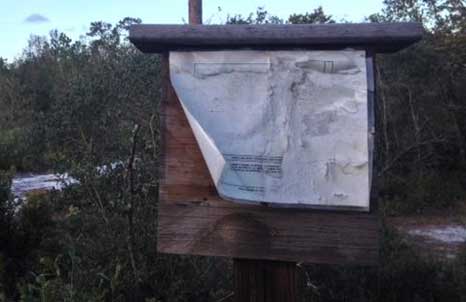 By now, the sun had set, and the darkness had engulfed us so thoroughly that I was only able to see by using the flashlight app on my phone. The twists and turns of the trail that exhilarated us during the day were a confusing maze in the dark.

With a muddy phone, dirty hands, darkened spirit, I eventually found a path that I recognized and we were on our way back to the car.   I bet that Walt lost 20 pounds from running but gained it all back in sand and water.  We had a thrilling adventure in the beautiful green landscape but, now we were both exhausted, dirty, and glad to be back to the comfort of my car.

Econlockhatche means “river of many mounds” in Muskogee. It is a fantastic area to get lost, both physically and mentally, as the difficulty and beauty of the terrain encourage the right balance of physicality and serenity. When I do finally emerge from its untamed, green trance, I feel refreshed and renewed.

I highly recommend the trails here, but when you go, be sure to prepare for the trip.  Stop at the Snow Hill entrance, where a large map stands posted in the parking lot, and take a picture of it.  Grab a trail map as well and mark where you’ve parked, so you know how to get back to your car.