The girl who never found herself 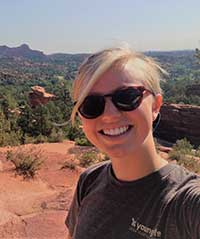 My sister has dubbed me, “the girl who never found herself because she left a piece of herself everywhere she went.” Most people, though, just call me Shelby.

My parents have a farm in the Smoky Mountains where I grew up drinking sweet tea in a rocking chair.

When I was 13, I went on my first solo-travel and had my first taste of nature through the eyes of a local and I never stopped. I’ve been blessed to travel to Latin America and hike the mountains of Costa Rica with locals who teach me the Spanish equivalent of “ya’ll.”  I’ve backpacked across Turkey, taking pre-sunrise swims with bioluminescent plankton in the Mediterranean.  I ended that backpacking journey on the cliff’s edge coast of Wales, where I hiked beside the ocean, being led to a forgotten castle by a white haired man who lives in a refurbished emporium. I’ve hiked across southern Spain with Americans and taken road trips across this magnificent country with Aussies.

I’ve learned from nature what humans could never teach and I’ve felt indescribable love from humans that didn’t speak my language.  For now, I live in Orlando, just ecstatic to be alive.