I'll Strike Where I Want

Everyone has heard the ol’ saying “there is more than one way to skin a cat”. That saying plays pretty true for most situations.  There is no black & white, there is more than one way to do things. I attempt to use this type of reasoning for most every part of my life but it doesn’t always happen that way. Sometimes I get a little tunnel vision and think that one way is the only way. Most recently, I have had to use this reasoning with my running style, more specifically; I have learned that there is not always one way to strike the ground.

The debate about how to strike the ground when running has been the hot topic of the last few years. It has been on the tips of many bloggers and professionals tongues and everyone seems to have the answer. Some are hell bent on forefoot striking and think the heal strike is like a slap to the face. Heal strikers are looked at as old farts, stuck in their ways, fossils. This blog will explain my experience with running over the last 10 months and how my body, foot, training has been effected.

Five Finger Bikila LS, Merrell Trail Glove, Salomon Crossmax Neutrual, Inov-8 F-lite 195, Inov-8 Road-X 233, and the Merrell Mix Master. I started running in the Five Finger Bikila 10 months ago and slowly worked my way through all shoes just listed. I still use all of these shoes but when different times call for different shoes. You see, I got caught up in the barefoot hype and jumped on the minimal foot wear bandwagon faster then I knew what was good for me. I paid the price. My calves always hurt, I had a strange pain on the top of my foot, and it seemed like I was in a constant state of soreness. And to pour a little salt on an already sore wound, I didn’t feel like I was getting any faster.

I was fed up. I thought I would never progress like I wanted to. I felt like I was swimming upstream, making some type of progress but nothing like I thought I would. That’s when I took the advice of a long time runner and started running in traditional sod. I also changed my striking to whatever felt good at the time. I was going against everything I thought was true about running, but my performance frustration called for immediate action.

To build strength I wore the Salomon Crossmax. I was primarily running on the street and these seemed to be the ticket to success. I wasn’t always landing on my forefoot; sometimes I would land midfoot, and even heal strike on occasion. What I found was that I could go further with less soreness, and generally I felt pretty good about the whole thing. 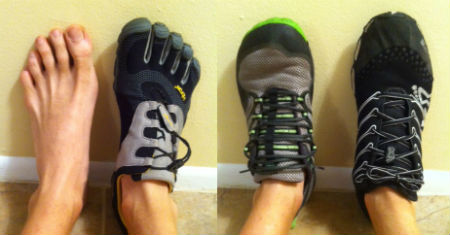 I soon switched to the Merrell Trail Glove for my trail runs. The shoe felt so light on my feet and even though I was forced to do more of a forefoot strike (running around roots and whatnot) it didn’t bother me much.  What I found was that the natural cushion of the trail allowed me to mid-foot strike from time to time without the backlash caused by running on pavement. I tried using the Trail Glove on the streets but I didn’t feel as good as I did with the Salomon Crossmax, plus my calves got sore really fast.

I loved the Merrell’s weight so I tried to find a nice middle ground between the Salomon and the Merrell. That is where Inov-8 F-lite came into play. They were a nice middle ground, a slight heal to toe drop but with more cushion under my feet. This was the golden ticket I needed for training for longer runs. Plus, the Inov-8 worked well on the trails. I used the F-lite for my ½ marathon trail race.

To sum things up. I still use all different types of footwear. I tend to use certain shoes for certain environments but the true of the matter is that I wear whatever suits my mood at the time. I also strike where I want to. I hear people talk about the great, magical, life changing effects of forefoot striking but the fact of the matter is that I strike where ever my foot hits the ground, and that spot changes almost every step.