My night at Overmountain Shelter exceeded my expectations. The dark grey clouds continued to intermittently shroud the valley below as the sun was setting and I was fast falling asleep. During the night I was awakened by howling of coyotes. The wailing cry was so close I think they were in the meadow directly below the shelter. Now fully awake I realized the moon was breaking through the clouds dusting the valley in light. The coyotes announced the passing of the moon beams.

In the morning everyone in the shelter was talking about our serenade over breakfast. I was the first one up and out of the shelter. I knew what the day was bringing and I wanted to be in it, a part of it and fully immersed in the events that were about to happen. I knew if I planned and timed it perfectly between the mileage and the weather, the hike up Little Hump and Big Hump would be extraordinary climbs that Truth, Troll, Limestone and Bismark would always remember. I was the first one to climb Little Hump in the early morning light. Halfway up I looked back to see the tiny red barn sitting in a sea of green. From below I hear the word hello echo up to me. From the deepest part of my soul I exploded in an exuberant yell with a WAHOOOO war cry that would make any fighting spirit proud. 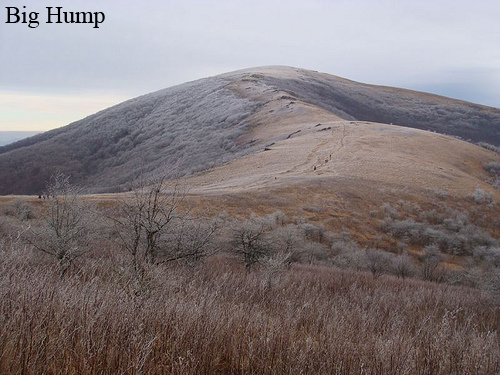 The cold wind struck me as I left the tree line and began my climb up the grassy bald. I am walking along a dark ribbon of trail surrounded by mountains and now know why this area is called the Appalachian Highlands. I felt I was hiking in the highlands of Scotland. The pioneers from Scotland surely felt homesick when they saw these mountains. I was following the path off of Little Hump and stopped, put on my jacket and ran back up the hill. I had to see the tiny figures of my hiking friends enter from the tree line and follow the same ribbon of dirt. I wanted to capture the expressions on their faces as one of the finest mountain sceneries unfolded before them. Little Hump was just the beginning. Big Hump or just Hump Mountain got its name for its enormous size. Truth and I start climbing and are blown sideways by the wind. The sun is now in its full glory and hardly a cloud is seen in the sky. A picture perfect day! We steadied ourselves as we continued up the exposed back of the hump, still being pounded by the wind. Down below we see two specks emerge onto the trail to begin their climb, Troll and Bismark. I kept yelling over to Truth, words I heard Greyhound say to me on the John Muir Trail, "Didn’t I tell you, was I wrong? Didn't I tell you this was going to be awesome?" All Truth could do was hold his arms up with a wide smile from ear to ear. I know that feeling, too. Up and over Big Hump the four of us found some rocks to shelter us from the wind and to have a snack. The talk, of course, was of what we’d just experienced. It was unanimous that this moment will be remembered forever. I looked over at Truth and asked him to verify the time. He, too, was shocked. It was only 9:30 am and we just completed a lifetime of memories. It felt to us that time had stopped, and I think it just might have.

I looked down and saw highway 19E and told the guys everything is downhill from here. We could reward ourselves with lunch within two hours. All the way down through the forest and over hills the talk was about nothing but food. Never mention food to a hiker when he or she has time to think. Plant the seed and the only thing they will think about is food. Excuse me for a minute while I reach over for a handful of MM's.

We hitchhiked several miles down the highway to a cafe called Country Kitchen. Four hungry, stinking hikers enter the restaurant and all noise stopped and all eyes were on the strangers as the door behind them closed. I envisioned a saloon scene from a bad cowboy movie. I was wearing a kilt so of course I got the most stares from these country folks. The waitress directed us to join two other men sitting at a long table. Directly above them was a sign that read "liars table." Perfect! The meal was great, everyone was friendly and everyone ordered what they were salivating for coming down off the mountain. 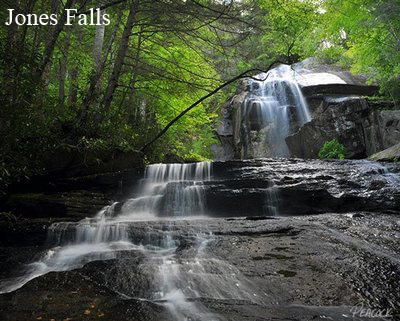 The day wasn't over yet. We still had some small climbs to make, a walk along Elk River and a visit to a very tall and heavy-flowing Jones Waterfall.

Exhausted everyone has found their bed for tonight and are fast asleep as I write. The mountains for me are always special.   When I can share forever memories of the mountains with other people, my work is done. Good night!

You can check up on Wayne's almost daily progress at his Trail Journal. Or you can view his last blog entry on Travelcountry's blog.