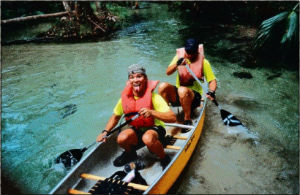 There’s something primal about adventure racing. It’s basic. Natural. One step above breathing; two above sleeping. Combining orienteering and all-out speed, adventure racing is like being a 'hunter-gatherer' who’s chasing down dinner. The only difference; dinner is a checkpoint and survival is (generally) expected.

Pangea Adventure Racing has pioneered this exciting sport in Central Florida for years, and Travel Country was lucky enough to be a part of their Super Hero AR event held in Apopka, Florida on September 17th. Participants for this race were encouraged to dress up to add to the ambiance, which was fun; however, the most “super” things about the event were the amount of heat and the size of the ticks.

These races are the equivalent of organized chaos: the object; run, bike, and row - while collecting checkpoints along the way in an effort to do so quicker than the other teams. Each team is randomly selected to start at a particular section of the course. Filled with apprehension, teams quickly look over their maps and chose their strategy. Absolute mayhem commences at race start, and as the teams settle in, the real magic is found in the beauty of nature, and seclusion.

In the wilderness, all you have is yourself, your team - of course, and your ability to adapt to the environment. Teams help one another along the way and put their heads together to find their checkpoints (some of which hide better than others, so it takes more intuition than speed). More often than not, the people standing on the podium are older....oops, I mean wiser...than they are fast.

The competitive aspects of the race - battling the elements with a perfect mixture of speed, strategy and fun - add to the ambiance of the experience. Jumping through tall grass, over fallen trees and sable palms transports me to an older time. A time when we didn’t have to worry about conflicting facebook updates, or whether our cell phones are “smart” or less than smart.

Adventure racing is about more than just the race, but the race itself is oh so enjoyable. Check out Pangea’s website for more info, and get outside.