The closest national park we have to Orlando is the gorgeous Canaveral National Seashore. But it's as flat as flat can be and I wanted some elevation change, so last month I went with three friends to the majestic Sequoia and Kings Canyon National Parks in California’s Sierra Nevada mountains. Over the years, the government has added more and more land from that area to the public treasury, forming two massive parks adjacent to one another, forming one big super-park. Sequoia, interestingly, was the nations second-oldest national park, after only Yellowstone.

I was awed by the wild land there and I’d like to give a few tips to loving your time there.

Take the time and suffer the potential queasiness to visit Mineral King. If you’re been to either of these national parks, it’s unlikely you’ve made the back-door jaunt over to Mineral King. To enter the park, you actually turn off the main road before you get to the normal park entrance. You drive for forty-five minutes on increasingly-curvy mountain roads until you discreetly enter the parks. There’s no pomp, the only thing that changes is the road is better-maintained, but it continues on for another 45 minutes. There are two campgrounds, Atwell Mill (in a lovely grove) and Cold Springs (along a majesic creek). There were few people in Mineral King whichever way you cut it. There are some cabins too and a parking lot at the end of the road called “Disney Lot,” as Walt Disney tried to develop that land for a winter resort decades prior. The residents are still proud to have repelled the development, as they should be. The valley is a haven a mile-and-a-half up in the mountains. My friends and I hiked to Eagle Lake at 9,500 for a rest. We ate, laughed, went swimming, and even climbed a bit. It was idyllic.

Spend a day in the Giant Forest but don’t camp there. The main giant sequoia forest in the center of the park is majestic, make no mistake. General Sherman (the largest tree in world by volume, at 52,513 cubic feet) is a sight to behold. Truly paradigm shifting. It (and most of them, honestly) make you wonder what is possible and what exists in the world that you don't yet know about. A hundred years ago, people on the East Coast didn't believe such fantastical trees existed. But they do and they will awe you. However, the campsites nearby, particularly Lodgepole, aren’t worth the price of admission. The sites there are small and stacked on top of one another. Go a little further northwest along the road to find any number of better campgrounds. And if they’re full, just swing into the national forest which touches that northwesterly road. Their sites don’t typically have running water, but there’s more space and most of them are significantly more beautiful than Lodgepole and co.

Get high to see everything. 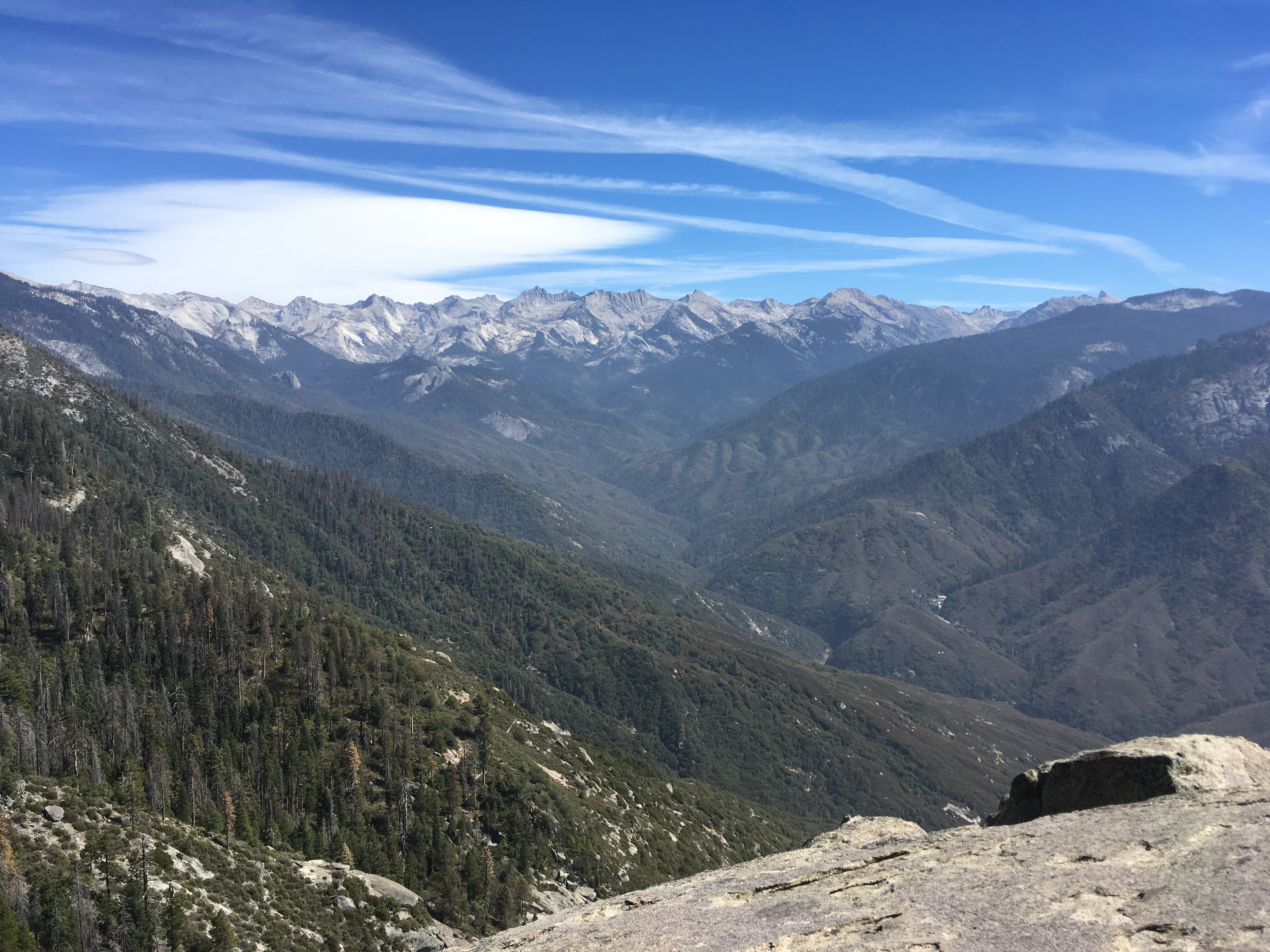 The overlooks are key here and they're all over the place. Moro Rock allows you to traverse up and out onto a giant exposed-spine of the mountain, seeing throughout Sequoia and almost all the way to Mount Whitney (the tallest mountain in the lower 48 states). Watchtower takes a couple hours to hike into but gives you an absolutely beautiful 180-degree view of a valley from halfway up it. Buena Vista overlook is easy to get to, as you park a mere mile or so from the view. The hike is lovely and easy, and the view is incredible. If you want to hike a little longer and go up a little higher, you can drive further south for the Big Baldy trail. I like the Buena Vista view because it directly overlooks Redwood Mountain Grove. This allows you to see a closer view of the difference between the Giant Sequoias (which look like towering broccolis) and the other (still big) evergreens. Also, the drive down into Kings Canyon is riddled with otherworldly views of the rocky peaks as you slowly descend. 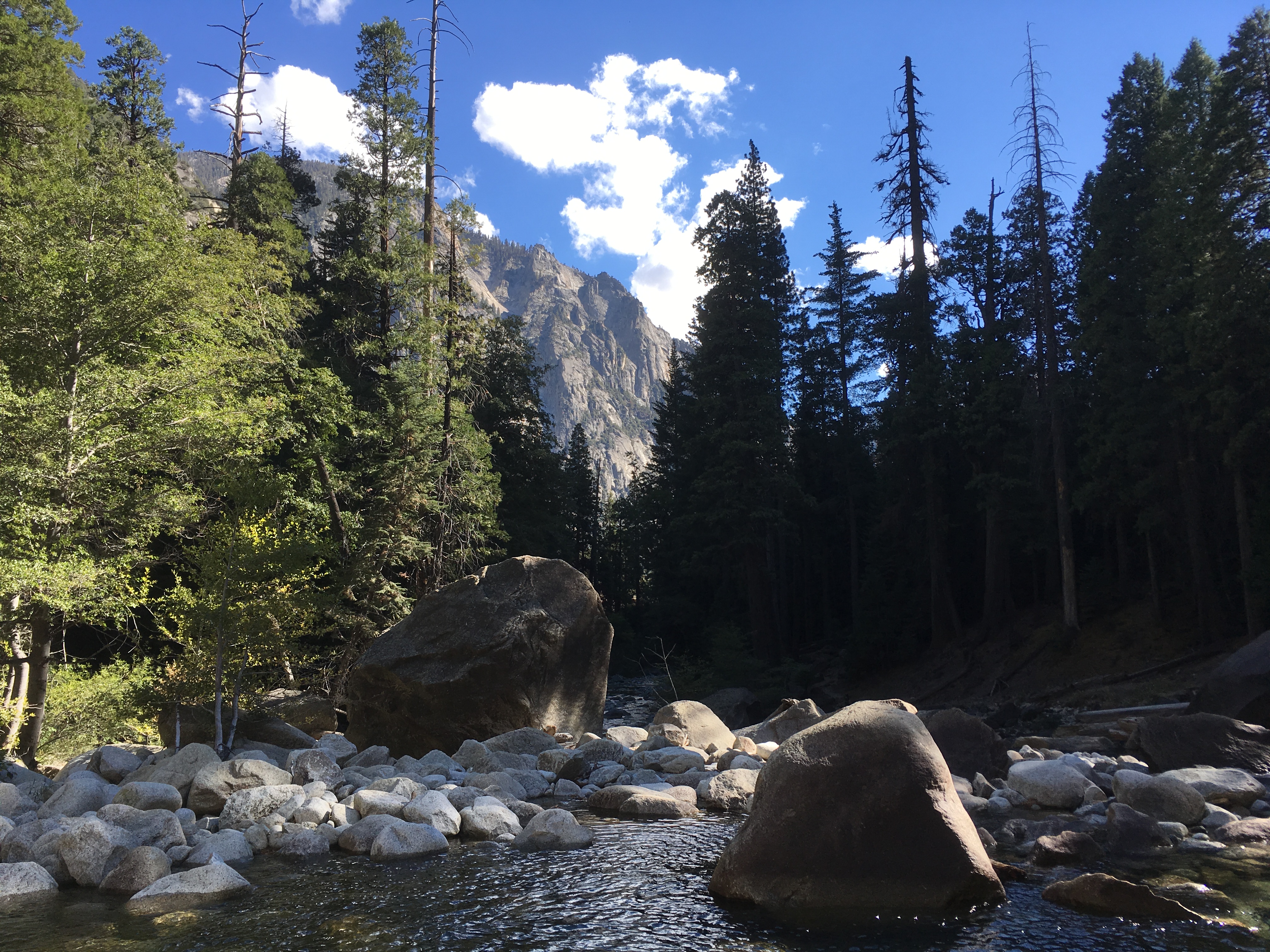 The 8-mile out and back is not only a delightful jaunt that cuts through many types of land and scenery for such a short hike, it is also incredibly beautiful. Also, it’s fairly easy. And the end surprise (unless you’re going on the loop) is a dip in the freezing waters. They’ll freeze you, but they are also rejuvanating. Going mid-day is best so you can get hot in the sun and then dry in it afterwards. If not, it can get cold. The sun “goes down” early at the falls because the sides of the gorge cut it off from visibility. Even in the off-season (as winter approaches) and the flow is lower, they’re still great. But apparently in the high summer, when there are lots of rains, or in the spring, they’re abundant. Notably, this probably changes where you take a dip. Worth the trip regardless. On your way back, take a stop off at Zumholdt Meadows, a quiet, iconic place to see the beauty of the valley from below. It is gorgeous, a gem of the park. 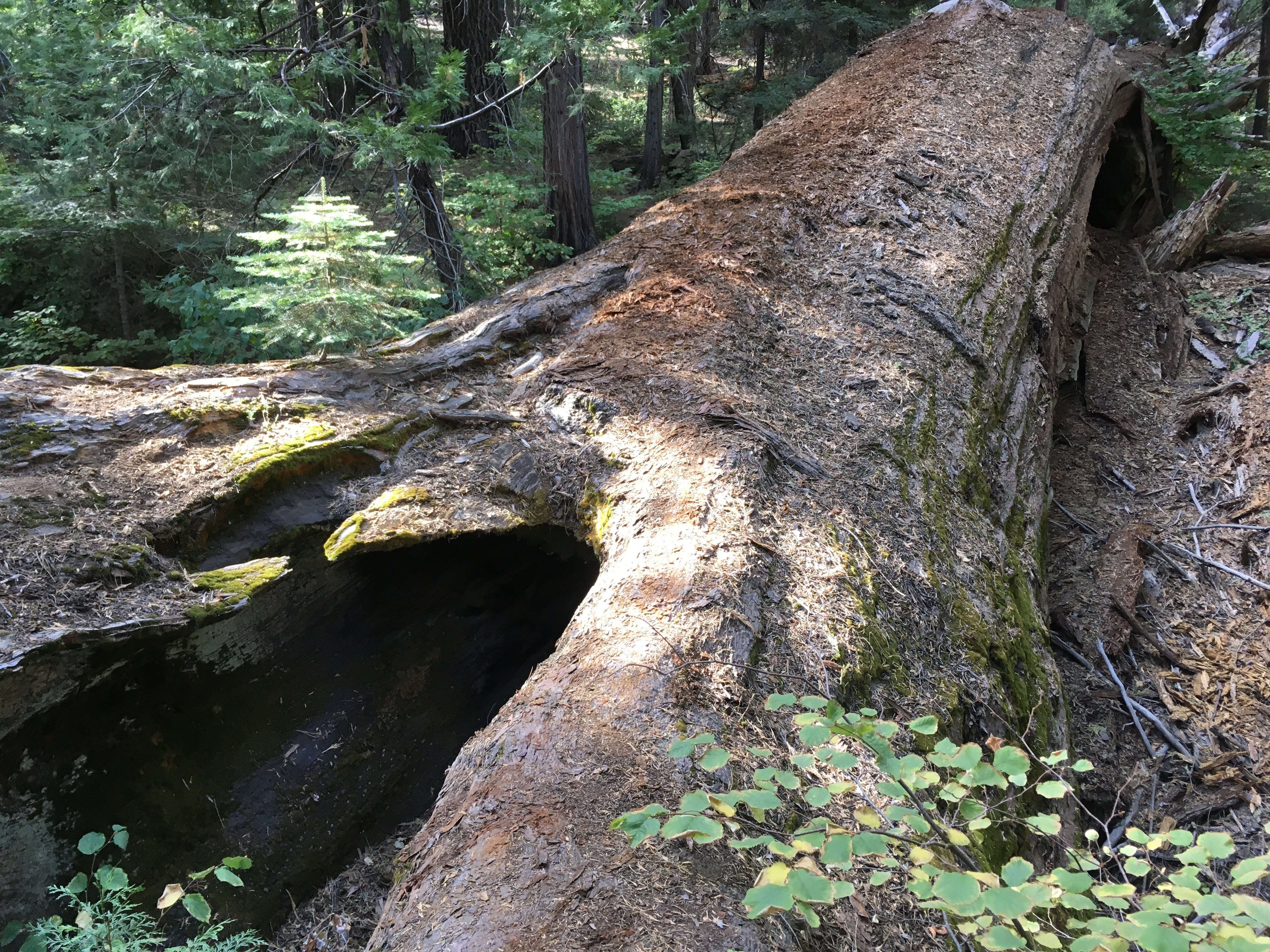 This place is actually magical. The most like Endor (for Star Wars fans, they shot footage for the 3rd movie in Redwood National Forest, further north in California) of anywhere in the park. It was magical, with the gigantic all over the valley and with few visitors. Forests aren't typically filled to the brim with these ancient giants, because the seeds need fire to bust out of the cones and grow. But it's maybe more striking to see the comparison of all the big evergreens against the backdrop of the gargantuan ones. What was also magical was getting to see the trees up close when they’d fallen down. It takes a minute or more to walk the length of them. They’re incredible. And when they’ve had fires, we could see the the occasional baby tree beginning its trek to the sky.